On Ruin and Renewal 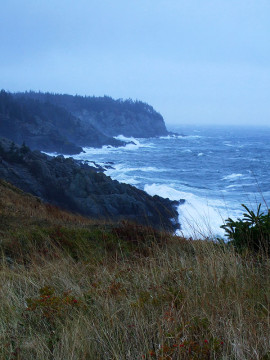 A winter storms into its galactic arms. New York City took a major hit. I happened at the time to be on Grand Manan Island watching the Bay of Fundy churn, the surf rake rock against rock on the Castalia shore in front of my home.

I’d come to my family’s retreat in Atlantic Canada for a much needed week of writing. I was reading an essay by one of my Tucson students about gang life in the city. “If he was going to slang,” she wrote, “he’d better get strapped up.” A drug dealer was out for justice over the mismeasure of his goods. He was heading for a club, armed and righteous. This is not fiction. This is the daily life of one student, a woman who comes to class wearing a white wife-beater that showcases her spectacular tattoos. She has a smile as warm as Oprah. Sometimes there’s a sheepish quality to it, as if she’s asking, “What am I doing in this movie?” She knows how to use a Glock. “You’re gonna need it,” her boyfriend said, looking after her. She’s lost so many friends to the street, she’s afraid to count them. Still, she feels pride in belonging, hanging with a guy who wants to put Tucson on the map, wants to make it as badass as L.A. or New York.