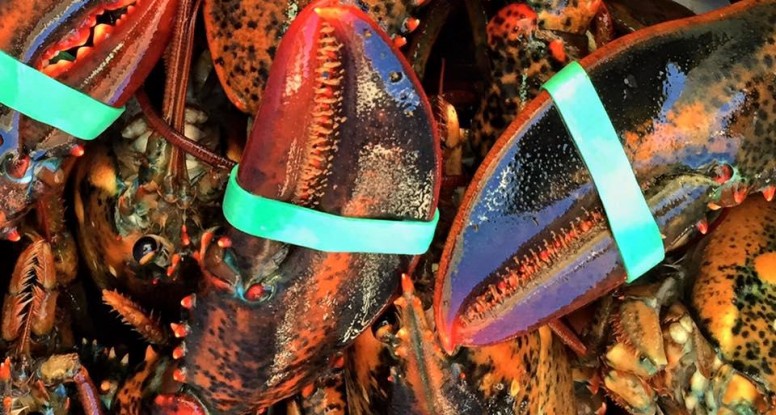 LOBSTERING IN THE GREY ZONE

The day we spent lobster fishing in the “Grey Zone” south of Grand Manan was, without question, the longest day of our trip, and it also the required the earliest start. We set our alarms at 4AM and while Page and Jan ate a quick breakfast of PB&J, I cooked up a box of Kraft macaroni and cheese (known as “Kraft Dinner” in Canada) in order to “carbo load” for the Grand Manan Half Marathon, which I would foolhardily run later that day.

We arrived at the Seal Cove wharf at 4:45, before the first light had begun to glow on the Eastern horizon. Several days ago Jan had interviewed one of Grand Manan’s most respected fisherman, Laurence Cook, and through charm and good fortune managed to arrange for the three of us to tag along with him for a day of lobster fishing. “Be prepared for a long day,” he advised.

At the docks, a man approached us and asked if we were the students from Arizona. He introduced himself as a member of Laurence’s crew, and we began to pepper him with a slow onslaught of questions. “This is a good boat to be on,” he told us. “Laurence is a smart man. If anyone’s gonna catch ’em, it’s him.”

When Laurence showed up, at 5 o’clock on the dot, his two crew members jumped into action, unmooring the boat and packing bait pouches with rotting herring. “The smellier it is, the more they like it,” one of the men told us, grinning. But even lobsters have standards, we soon found out. One of the herring boxes, left in the sun a few days too many, was writhing with maggots, and to our relief was summarily dumped overboard. 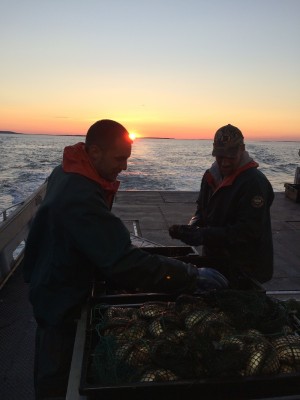 As we sailed out of Seal Cove toward the open sea, we were treated to a remarkable sunrise–our only one of the trip, due to many late nights fueled by long conversations with our island hosts. Laurence explained the particulars of fishing in the “Grey Zone” to us as we sailed south in the early morning light. In Canada, the lobster season runs from November until the end of June, with a strict moratorium on laying traps during the off months. In the US, however, fisherman are allowed to catch lobster year-round.

Because of a still-unresolved jurisdictional dispute over international fishing rights between Canada and the US, a “Grey Zone” has existed along the border between New Brunswick and Maine, where vessels from both countries are allowed to fish the same waters. Canadian boats are allowed to fish lobster within the Grey Zone outside the regular season, as long as they submit to the installation of black box devices that ping their location every 15 minutes via satellite to Canada’s Department of Fisheries and Oceans, ensuring that they don’t venture into sovereign American waters.

Laurence, despite having taken advantage of the extra months of lobstering since the opening of the Grey Zone to Canadian fishermen 2002, told us that he’d prefer an “equitable, rational plan” to the hazy status quo of the present. Fishing in crowded and disputed waters ratchets up tensions between competing Canadian and American fisherman–and sometimes even among countrymen. Traps are frequently cut, leaving a multitude of ropes, anchors and countless lobster traps unrecoverable on the bottom of the sea floor at great cost to fisherman. Guns have been pulled. Pursuits through fog and bad weather have ensued. Canadian vessels have been boarded by the U.S. Coast Guard, at risk of causing an “international incident.” “The younger guys come out here and get excited,” Laurence explains, but it is clear that he prefers to operate with a bit more calm and reserve. “I don’t wanna start a war,” he tells us.

As we arrived in the Grey Zone, Laurence pointed out the microwave towers on the coastline of nearby Cutler, Maine. Rising up in the water was the pale lighthouse of Machias Seal Island, where Canada staffs one of the only non-automated lighthouses in the country in order to maintain a claim on the island based on “continual use.”

As we approached the first line of traps (known as a trawl), Laurence told us that he expected the worst haul of the year today. “The lobsters are about to shed,” he said, leaving us to wonder if that somehow tempered their appetite for rotting herring. Laurence then positioned his boat beside one of his distinctively-painted balloons and his crew began a process that would be repeated again and again throughout the day–the hauling up of the trawls that had been left sitting on the ocean floor unchecked since the previous week. Since I’d need at least another three paragraphs to describe this process, I’ll let the following videos do some the explaining:

It’s safe to say that Jan, Page, and I spent the better part of the ensuing hours marveling at the strength, efficiency, and hard-working focus of Laurence’s crew as they engaged in the bewildering multi-tasking necessary to safely complete this process time after time. Adrift as we were on flat, sunny waters, we were further baffled by the fact that these men were required to do the same back-breaking work at this pace through all manner of inclement weather–in the freezing cold and during roiling storms. We had all heard that commercial fishing was the most dangerous occupation in the world, and now we understood why: whizzing pullies, the constant looping and unfurling of rope, the fast sinking of anchors and traps–all of it threatening to meet even the most temporary lapse in attention with a quick snap, whip, pull, or drag into the frigid waters of the Bay of Fundy. 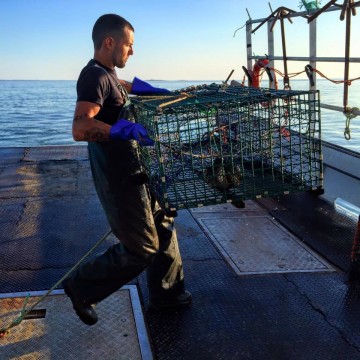 Page caught this one.

After nearly 14 hours aboard the boat, we were in awe of Laurence’s sharp presence of mind and the hardworking perseverance of his crew. Laurence and his men were frustrated with the day’s haul–they suspected that several of their trawls had already been hauled up and picked through by rival fishing vessels during the week. Indeed, there was a palpable air of lawlessness in the Grey Zone, the same lingering threat of disorder and unpredictability that so often pervades along unguarded frontiers. It was obvious that Laurence does his best to stay above it, to temper himself during tense situations as much as possible. Many of Laurence’s trawls had been laid on top of that day, and we watched him painstakingly cut and and knot his ropes to re-make his trawl lines. “I don’t cut other people’s traps and they don’t cut mine,” he told us.

After all, he’s not trying to start a war. 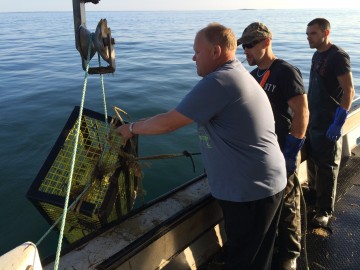 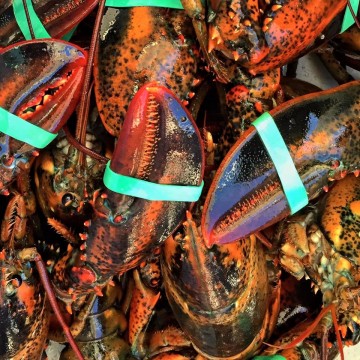 Thanks to Page for this photo

Paco did run in the half marathon, a benefit for the Grand Manan Boys and Girls Club, at the end of a nearly fourteen-hour lobstering day. He won third place. Talk about stamina. Though there were only three men in the race. Still a mighty day. 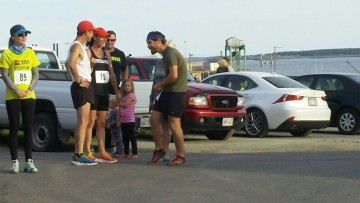