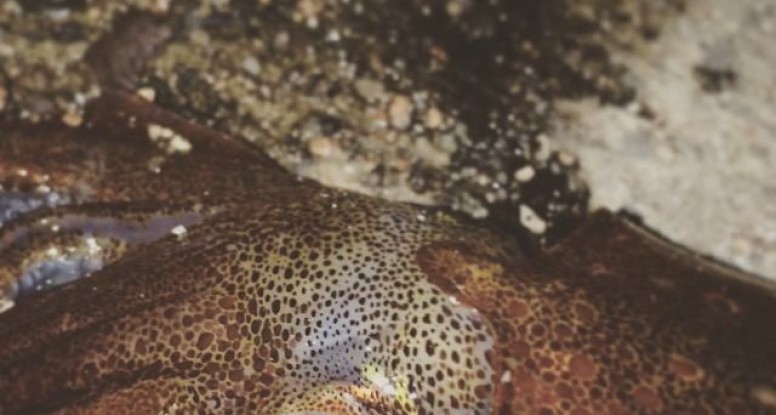 SQUID, CLAMS AND A FRIENDLY ALPACA 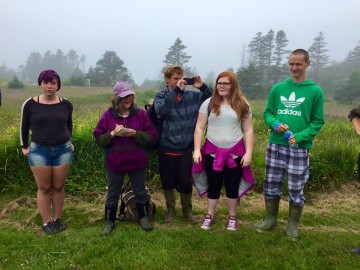 They’ve all been instrumental in providing a lens for our visit by bringing us on backwoods trails, introducing us to their grandmothers, teaching us how to jig for squid, dig clams, and have kept us laughing the whole time. They are each working on a creative project to document Grand Manan stories and histories. I want to dedicate this post to all six of our students and take this opportunity to share several extraordinary moments we shared with them.

And here’s a photo of Mackenzie with an alpaca just for fun. 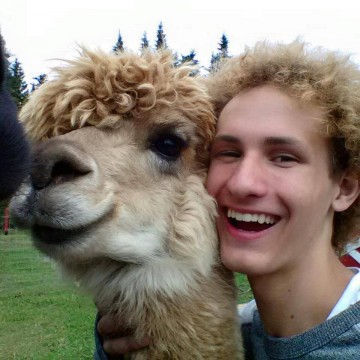 Our first weekend on the island, Mackenzie and Liam took Page, Paco and me squid jigging. If you’ve never jigged for squid, it’s best done at night when the squid come out to feed, with a rod and brightly colored plastic lure, two rows of curved metal hooks at the bottom. Jig is the term for the lure and also the jerking motion used to attract the squid. 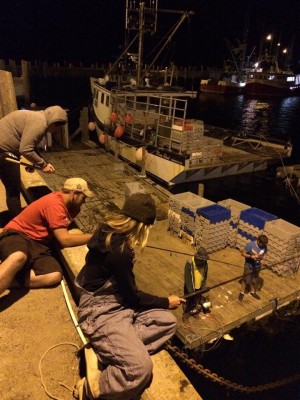 We walked to the North Head Wharf at 10 p.m. at half-tide. Part of the intricate weave of the wooden wharf covered in algae and kelp was visible below us as the dark of night finally set in about an hour after sunset. We walked past the lobster boats, some long, wide and shiny; others weathered with “for sale” signs. Liam had been out there with his fishing pole and guitar (he’s a talented self-taught musician) since 5 p.m. and hadn’t caught a thing. Mackenzie hung out on the wharf snap-chatting and laughing. A family from Newfoundland a.k.a “Newfies” had a multi-generational squid jigging operation with buckets full of their catch at the top of the wharf. A swarm of smaller children from “Whale Camp” (a summer program attended mostly by young American kids) got a squid jigging lesson from a camp counselor. Several other Grand Manan high school students jigged next to Liam.

I looked down to see the swirling rise and fall of a school of brown squid. They swarmed just below the surface in a group of several hundred, moving up, down, back and forth as if tied together on an invisible dancing net. Soon after we arrived, a seal rushed close to the wharf, scattering the squid. The floodlight above gave everyone’s faces a yellow hue and cast light at the perfect angle to illuminate the strange tentacled creatures underwater. A high school student named Vaughn quickly caught eight squid in about ten minutes. I asked Vaughn to give us some tips: cast out far and low; drag the jig in giving it slight jerks (or “jigs”) so the squid think your lure is a shiny fish. To my and Page’s dismay, Paco quickly caught two squid. As he brought one up to our bucket, he inadvertently squirted dark ink all over himself and his hipster jacket. Paco repeated, “I got inked. I got inked!” excitedly in his falsetto I’m-totally-surprised voice. Liam handled the squid as we all stared at its large googly eyes, its translucent speckled brown body, and squirmy tentacles at its end. Liam explained that we had to remove the ink in the process of cleaning it. As he showed us, he squirted stinky ink all over his hands and shirt, more on Paco’s jacket. The Whale Camp kids squealed.

Mackenzie said he likes to catch the squid with his bare hands when they are particularly thick around the wharf, refusing a rod or jig. He clambered to lie belly-down on a lobster car (a wooden raft for storing live lobsters in underwater compartments before transfer to market or tank house storage facilities). With his arms in the water up to his elbows, Mackenzie tried to grab the squid by the body when a group swarmed by. He didn’t catch a single one.

Before we knew it, it was nearly 1 a.m.; the elusive squid teased us, evading our lures right in front of our eyes. Only having caught two, we gave our bounty to the Newfie family. The father showed us how to clean the squid with several quick swipes of a small sharp knife.

Another afternoon, Michael Brown invited me to go clamming on Ingalls Head down Fisherman’s Haven Lane. I arrived and Michael handed me a clam hack (like a bent pitchfork) to dig for clams in the sand. With two of Michael’s friends, we headed down to the ebb tide flats where the surface of the sand bubbled with clam air holes. Bent down, I raked back the sand about a foot below the surface. As clams tumbled out, they shot salt water in the air, what Michael called “clam pee.”

Here’s a short video clip of Michael digging for clams, a bit shy in front of the video camera.

Michael lives with the ebb and flow of the tide by digging clams, picking dulse (edible seaweed), and working on his grandfather’s lobster boat. He buzzes around in a skiff he calls “The Little Tipsy.” Michael speaks in abrupt truths that often strike me with their vulnerability and sharp social and emotional analysis.

That afternoon after digging clams for about an hour, several others joined us on the flats: two older gentlemen, Gordy and Walter, and a family “digging for a feed.” Michael told me Gordy is the best clam digger on Grand Manan. Gordy is short and sturdy, wears a bandana with two eyes on his forehead, makes his living off digging clams by working two low tides per day. Once he digs a critical mass, he takes the ferry to the mainland where he sells the clams to market. When I asked what he likes about digging clams, Gordy told me, “The only boss I have is the tide. She’s the only boss I got. When Mother Nature says its time to go home, I go home.”

Michael dug about $100 worth of clams that day. I helped a little. As we dug, Gordy and Michael gossiped back and forth, talked about Michael’s family, the recent passing of his grandmother and guardian Rilla Greene who was described in her obituary as “never afraid of hard days work.” Someone I wish I could have met, Rilla worked in the fishing industry boning herring, in the sardine factory, and most recently as a dockside monitor for local fishing companies. Michael explained that she drove herself to the hospital in the final days of her life. I had the sense that Gordy keeps an eye on Michael. Although Michael feigned a competitive tone when Gordy first arrived, it became clear the longer we dug, how much the two respected each other.

I feel enormous gratitude for the generosity of these students and all the other Grand Mananers who invited us into their homes, onto their boats, who fed us delicious seafood chowder, and let us take notes while they lobster fished. I will remember these two weeks on the island for the rest of my life.