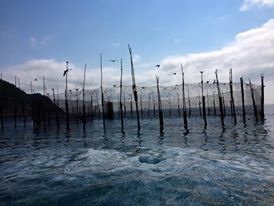 Leading up to our Grand Manan visit we read of weirs and tried to understand their complicated structure and function, their ingenious design. They’re difficult to comprehend, so when we got the opportunity to witness a weir being seined, we were thrilled.

The day before we went to fish the weir I visited one being repaired from damage done last winter. A pile driver was used to replace stakes – the towering hardwood poles that make up the skeleton of the weir shape and structure. The stakes were tied together in a floating raft and dragged out to the site by a skiff. The pile driver, installed on a dock-like platform, was hauled out by a larger boat. Once inside the weir, the men boarded the driver and set to work pounding the stakes into the ocean floor. 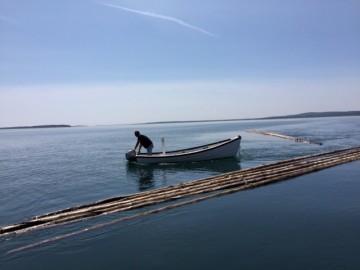 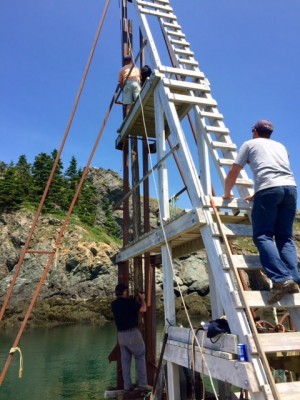 Over the murmur I heard the men discussing, in brief sentences and nods and a language I’m not privy to, the prospects of herring this season. The overall outlook is grim, but there was mention of one weir soon to be seined.

I asked who was planning on seining? Could we see it from the sea wall at Dark Harbour? Before the day was up, the man I asked told me to be at Dark Harbor by 1:45 p.m., and that Captain Stacy Brown would take us on his boat so we could see them seine the herring from inside the weir. These opportunities are made possible often and only by the generosity of people we have met here.

Stacy, his wife Annise and his son Dawson, along with the rest of the crew, invited us aboard. They’d been out early that morning “feeling” for herring. In a skiff they motored out, dropped a lead weight attached to a copper wire until it hovered just above the floor and drove circles around the weir. Based on the number of taps on the wire and the force of them, Stacy guessed how many fish were below, using his estimates to predict the size of carrier ship needed to haul the harvest to processing plants off the island. Stacy guessed the weir contained 22-hogshead (1 hogshead = 1250 lbs) of herring roughly 7” long. 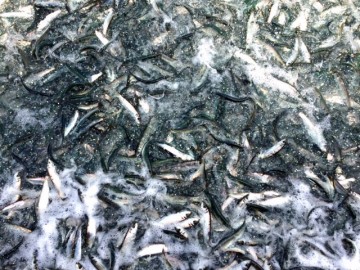 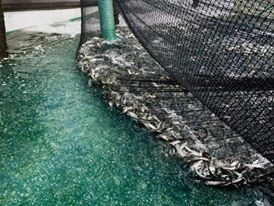 Observing the seining of the weir brought into focus a process I before understood hazily at best. It’s a process I am still struggling to explain, though I have no doubt that if I manage to describe it adequately in future writing, I can do so only because I had the opportunity to witness it: to witness the setting of the net, the way it circles around the herring already captured in the weir; the way the process responds and waits and rushes depending on the tide; the role of the diver who swims beneath, ensuring the fish are secured within the net, the purse. And then to watch as the net is hauled up until the herring spiral just beneath the surface. And then up another couple of inches until they are flopping about, vacuumed up by a giant tube dangling off the carrier on the outside of the weir, deposited into a giant storage tank on board. Their scales drift away in the process, leaving first just glitter in the water surrounding the seine, then frothing into thick white foam. The men above the carrier measure the fish: 22 hogshead of herring approximately 6.5 inches long. 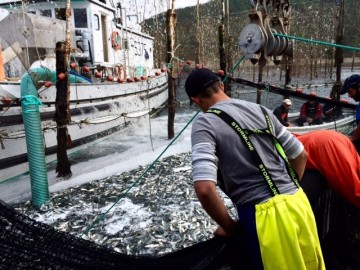 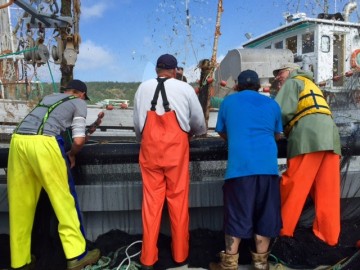 The crew is pleased; the catch puts them on the book. Though it is nothing like the heyday of years past, it is better than last year when they seined only four times throughout the entire season and didn’t even recover the money spent on repairs from the winter before. Stacy’s wife, Annise, was instrumental in engaging Paco and me in the process. Without her explanations we would have been lost—excited and engaged, but confused. The crew answered our incessant questions graciously, made sure we understood what was happening, and offered us front row seats.