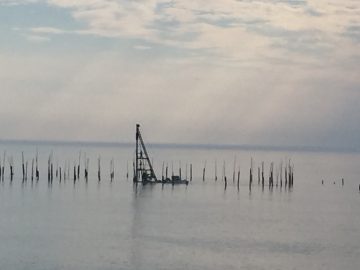 Of the strokes I learned at canoe camp, the feather was my favorite: swiveling the blade of a paddle back and forth against the water, parallel to the gunnel, to approach a dock or another boat. I never thought I’d use it to pull my way closer to a salmon cage, as I was doing in my little red kayak. The Dark Harbour water was calm in its reflection of the purple-grey sky above and my black blade sent ripples in the direction of the fish. They were enclosed in netting suspended by a thick rubber floating rim, presumably netting that fell all the way to the ocean floor. One net on the interior of the cage kept the fish in, and another, on the outside, whose webbing was lined with strong metal wires, kept seals out, lest the dogs-of-the-sea reach in with whiskered snouts and dine their hearts out. Which happens, apparently. From the kayak, as I peered in, it seemed that the wire netting was working so far. No seal in sight.

I had seen the salmon from the Dark Harbour wharf earlier that day. From that vantage, Claire and I looked out at the cages as we interviewed Matthew Ingersoll, who runs the operation. He gave us an overview of his plans for the population of reared salmon, totaling four thousand, sorted by age (smolt to adult) into a set of three cages. When they graduate into maturity, at which stage they develop their archetypal beaks, Matthew’s crew will guide them from their enclosure to the wharf in cages. From there, the crew will lift them into tanks in trucks, then lift those tanks into a helicopter, and then drop the fish from the sky – fins flapping in the air – into a nearby river. (For further reading, see the blog Page Buono wrote about this very operation and in her blog post titled Mort Dives here.)

If you look at the cages from the wharf for long enough, you will see a glint of a salmon flank as it leaps from the water and towards the other side of the cage. I took the kayak out and down the slick intertidal because I wanted to be closer to the fish. Not too close, of course, no trespassing involved. But close enough to watch that leap. As I sat there in front of the oldest, largest salmon I couldn’t see the school, but I could almost feel them like a thrum in the hull of the kayak beneath me. Then, without warning, the jump! An eerie display of fish flesh hurtling through the air and falling. That’s why there’s netting on top of the cages too. Carly Fleet, who has worked on aquaculture projects before, told us that sometimes a heron will perch on this netting and snake its neck through, beak agape, in anticipation of a jump.

When I asked Matthew what challenges he faces in running this operation, he said the biggest task is keeping the fish alive, because if the seals don’t get them, then diseases might. While the Dark Harbour cages hold a relatively small population of salmon, larger operations further offshore contain tens of thousands of fish all living together in conditions that tend to promote the rapid spread of disease. Salmon are especially susceptible to parasitic sea lice, for example, which latch on to the fish and feed on their blood, skin and mucus. The lice spread when fish are in close contact with one another, which is of course inevitable in a cage. To keep salmon alive, some aquaculture companies will go to extreme measures. Back in 2009, Kelly Cove Salmon Ltd. applied the pesticide cypermethrin to offshore cages in an attempt to control sea lice. During our time in Grand Manan, we talked to several residents who are still concerned at what this chemical application has done to the marine ecosystem – and especially lobsters, for which cypermethrin is lethal.

But floating around in Dark Harbour, paddling to the cage where the smolt were making their smaller leaps, I wasn’t thinking as much about the science of rearing salmon or its ecological implications. Instead I was considering the sheer challenge of taking on such a project in the first place. From these cages, humans were making an attempt to restock a major fish population in the rivers that feed the Bay of Fundy. Dropping fish from helicopters! The challenge of managing all of that, of not just heli-transport but simply keeping fish alive, seemed to reveal the severity of the broader decline of fisheries in the region. Such extreme human intervention reflected an increasingly precarious relationship between Grand Mananers and the fish that have supported the island for centuries.

Dark Harbour, in all its evening magic, was a place that seemed to speak to that precariousness, and not just in the salmon cages. Earlier that day, perched on the thick round rocks of the Dark Harbour sea wall, our field studies crew had watched the early stages of weir building. A team of six men, moving quickly, winched a boat over a dip in the sea wall, and, on the other side, with a large floating driver, placed and hammered the weir stakes into formation. The machine was nearly as precise as the men who danced around it, their limbs and legs sprawling, grabbing, hoisting, splaying as the operation proceeded. To build a weir on Grand Manan is an investment of not only labor but substantial capital. Each weir stake can cost up to five hundred dollars, and from the looks of it this crew was setting in at least ten stakes before nightfall.

The way the men moved as a crew revealed their expert understanding of the unsteadiness of waves that rocked the craft. As we watched, men and raft swayed together, their silhouettes occasionally blurred by waves of fog that slipped by in sheets from the sea. Pulling up a stake, placing the stake, hammering it with the giant driver, hit by hit, as many clangs as it took to drive the sharpened tip of it into the ocean floor. Soon they would string the weir with twine, seine the weir, and haul herring from the sea. But there would only be a small chance that the profits would allow them to break even. That’s why, on an island where dozens of weirs once lined the shore, this year there are only twelve.

It struck me as we watched them that just beyond their silhouettes, in the distance, was the Grey Zone, another precarious area for Grand Mananers and fish, of the lobster variety (see Paco Cantu’s piece on the Grey Zone here). I’ve been told that the influx of lobster to the region, partially because of rising temperatures and climate change, has led to the “Grand Manan Gold Rush.” The good catches have brought millions of dollars of revenue to the island, so a potential to catch more during the summer months drives a number of boats out to the contested waters of the Grey Zone that lies along the U.S./ Canada border. But the lobster fishery, too, especially in the Grey Zone, is precarious. Will rising temperatures continue to push the creatures northwards beyond the Bay of Fundy? Will the intensiveness of the current fishing lead to a plummet in population numbers? Many of the fishermen we have spoken with predict that they will remain in the Bay for several more years. But after that, what will be fished next?

On one of the last days of our program, I visited the Grand Manan Museum and saw the exhibit that the first director of the museum created, which documents the history of fishing on the Island. It starts with black and white photos of herring seining, a diorama of a weir, and the curious words: The story of Grand Manan begins and ends with people and fish. I wonder what the director’s intentions were in using precisely those words. To claim an ending to any story as it’s still being written is either prescient or bold. But as I reviewed those words after learning from islanders over the past few weeks, I couldn’t help but feel that I had visited this place at a remarkable chapter in the story of people and fish; a story I glimpsed through netting and weir stakes that night in Dark Harbour. If the story of Grand Manan begins and ends with people and fish, what happens to the people as the fish continue to disappear? 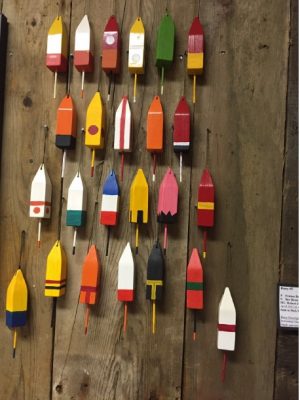 Model lobster buoys at the Grand Manan Museum; each color pattern corresponding to a distinct boat or family.