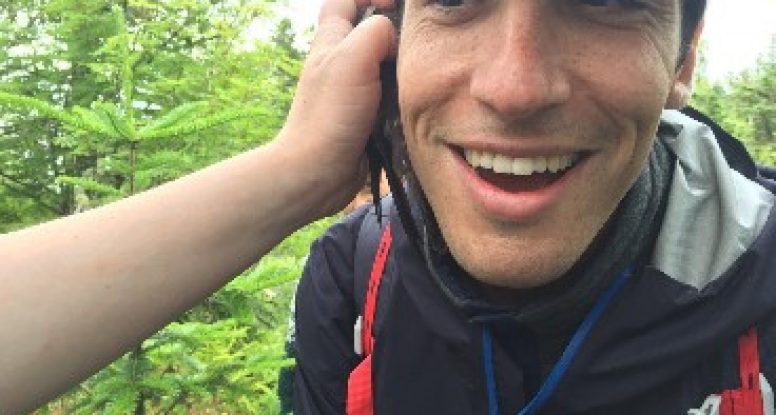 About five miles south of Grand Manan lies Kent Island, a home for nesting birds and spittlebugs and lots of fog. I’d hoped to visit the island during my stay on Grand Manan, but the trip wasn’t guaranteed. Boats bound for Kent Island are infrequent, and weather conditions needed to be favorable in order to make the journey out. On our daily schedule for Thursday, July 13, the proposed date of our trip, we simply drew a star, superstitiously thinking that writing out KENT ISLAND TRIP might jinx us. What if they run out of room on the boat? Or maybe storms might roll in. 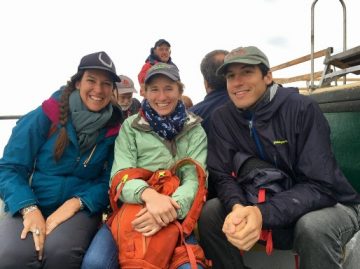 Our superstition rewarded us: we were greeted Thursday morning by calm waters and mild, drizzly weather. The trip was on. We hopped in the car, made a necessary stop at the North Head Bakery for cinnamon doughnuts and blueberry turnovers and more cinnamon doughnuts, and drove down to Seal Cove, where Russell Ingalls waited for us in his boat, Island Bound.

We arrived at Kent Island at low tide, which meant Island Bound and its trusty skiff Chuck, could only take us so far: we’d have to walk through the muddy basin to reach shore. Thankfully, Ed Minot, the director of the Bowdoin Scientific Station on the island, and caretaker Mark Murray guided us across the tricky terrain, offering solid mud-walking advice like, Lift your heel up first so you don’t lose your boots! 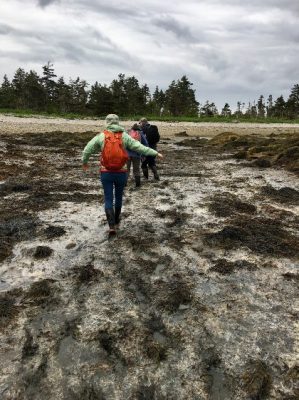 Fog attracted me to the Field Studies Grand Manan program, specifically the work of Bob Cunningham, who studied fog on Kent Island for seventy years, in what was the single longest continuous study by one person in one place, ever. I had heard about Bob’s rudimentary methods for gathering fog and had seen photos of him hanging high from an aluminum pole, fixing an anemometer, but it wasn’t until I was out on Kent Island, standing in front of his small 8’ x 6’ shack, named Fog Heaven, that I could really imagine what those summers on the island must have been like for him. With only his shack and a few basic meteorological instruments, Bob performed research that would lead to the Clean Air Act of 1963. A headline from the June 30, 1940 issue of the Mount Washington Daily News describes Bob’s work succinctly: TECH MEN JAM FOG INTO JARS FOR RAIN RESEARCH. 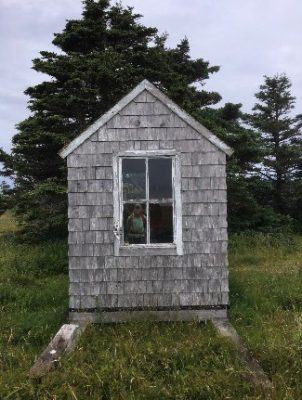 Today, the shack houses a Bowdoin College research student, and the weather station is much more sophisticated: Solar-powered instruments connected to WiFi collect data, and you can even watch a live webcam that shows the current conditions on Kent Island. 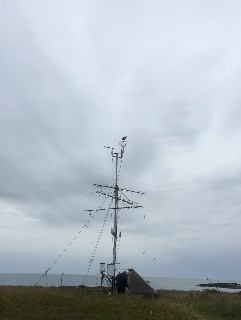 Before lunch, we discovered a series of letters sent to Bob by Ernest Joy, Kent Island’s first caretaker who stayed on the island year-round with his wife, Carrie. His letters detail the critical role Ernest played in recording the weather conditions on Kent Island when Bob Cunningham was away. Ernest was also quite funny: he often joked with Bob about the weather, once claiming that the fog was so bad it nearly caused his eyebrows to mold! 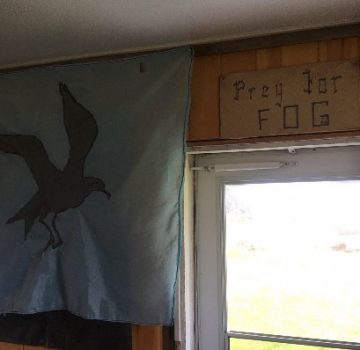 After lunch, Savannah-sparrow researcher and poet Ian Pristis led us on a walk through the meadow to see the birds’ nests. Savannah sparrows on Kent Island have their own unique song, Ian explained to us, and the sparrows pass on their songs from generation to generation. As part of his research, Ian and colleagues wanted to find out whether the sparrows can learn new songs. Camouflaged speakers line the trail and play these new songs, mimicking two birds communicating with each other. So far, some birds have indeed learned the new songs, and have even passed those songs on to the next generation. 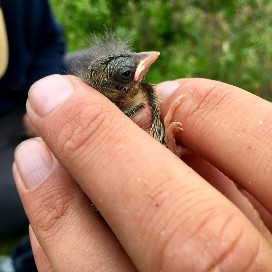 By 3pm, the tide had gone up, and our boat was waiting for us at the dock. On our walk down to the water, a Bowdoin student offered to show us the storm petrels burrowing in the forest on Kent Island. Whisking us through the forest, she paused at a small clearing and leaned over, reaching her arm deep into a burrow, all the way past her elbow, in search of a petrel. “Feels like there’s a chick in here too,” she said. Carefully, she lifted out of its burrow a mature petrel. “Want to smell it?” she asked. I’d never been asked to smell a bird before. Its scent was rich and musty, like the forest floor itself. She then held the petrel up to our ears, the way you would a cell phone, and we heard its rapid heartbeat. Finally, she showed us the petrel chick, small and gray like a ball of dust, or a rain cloud. 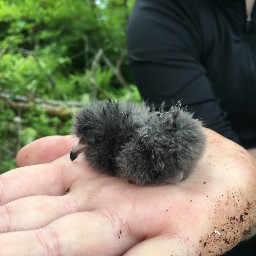 By the time we boarded the boat, the rain had picked up. A group of students from Dalhousie rode back with us, documenting the birds they saw in the water along the way. As I watched them record their findings, I thought about the similarities between scientists and writers, about how close observation is so central to both our work, and about how the boundary between these fields is so much more fluid than is usually assumed. I thought about Ian studying Savannah sparrows and imagined him taking measurements in his notebook, jotting down notes for a poem in the margins. I thought about Zoe, a Bowdoin biology major who studies spittlebugs, who talked with us about the importance not only of performing research but of communicating that research clearly to a lay audience. I recalled the books scattered around the common area tables–field guides to local birds and plants and marine life, as well as novels like David Foster Wallace’s Infinite Jest and Colson Whitehead’s The Intuitionist–and thought about how Kent Island has all the makings of a place in which the sciences and the arts coexist.

I hope I can return to Kent Island. I have this dream of everyone sitting around the long table where we ate lunch, after the research is done for the day, and discussing the essays and stories and poems inspired by work on the island, new songs to carry with us back to our respective homes when the summer ends. 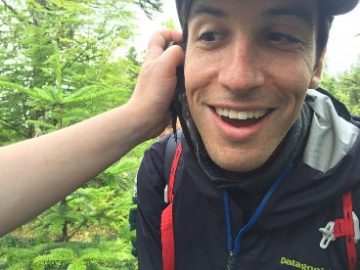