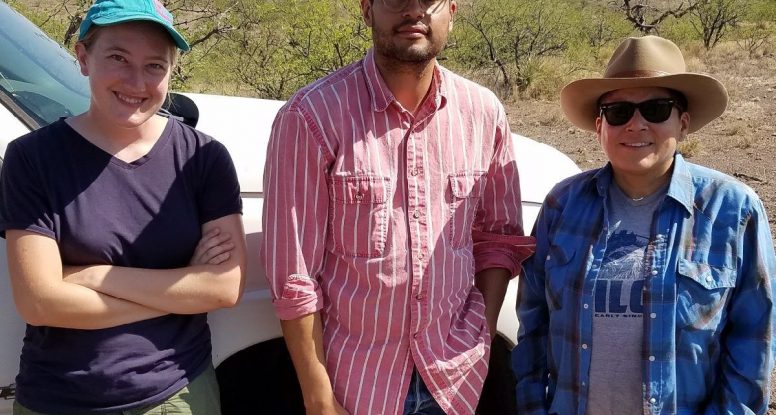 WRITING IN RELATION: THE SOUTHWEST FIELD STUDIES IN WRITING PROGRAM

In an article published in Esquire magazine in 1974 poet Muriel Rukeyser recounts her experiences as witness to the dawn of the Spanish Civil War. Towards the article’s conclusion she remembers a conversation she had on a ship fleeing Barcelona. A passenger asks her, “And in all this—where is the place for poetry?” Rukeyser responds, “I know some of it now, but it will take me a lifetime to find it.” Across a lifetime of countless poems and essays—even a posthumously published novel—Rukeyser proved that literature could incorporate testimony and document, could correct the historical record and be a place to advocate for a better future.

Rukeyser’s words and example were very much with me over this summer when I served as faculty liaison and educational facilitator for the inaugural Southwest Field Studies in Writing program sponsored by the Agnese Nelms Haury Program. This initiative sent three graduate students in creative writing from the University of Arizona, Abby Dockter, Gabe Dozal and Raquel Gutiérrez, to Patagonia, AZ, to work with local environment and social justice groups on writing projects that reflected the issues unique to the border region.

Over the course of a 10-day residency, these writers became researchers and witnesses. In the offices of the Kino Border Initiative, a bi-national migrant advocacy organization, they listened to anecdotes, statistics and testimony that described an immigration and deportation crisis. In and around Patagonia, they collected stories from southern Arizona ranchers, scientists and activists. In a migrant woman’s shelter in Nogales, they heard agonizing accounts of death threats and economic imperatives from a quartet of women in the process of considering asylum, migration, or a return to their place of origin. On an eight-hour drive through the desert near Arivaca to replenish water stations left for migrants with volunteers from Humane Borders, they came face to face with the deadly conditions migrants face on their arduous journey north.

The inaugural participants in the Southwest Field Studies program produced writing that clarified, contextualized, and imagined new possibilities from what they witnessed.

Dockter, a recent graduate in creative nonfiction, gave voice to ranchers who want to monitor their bottom line as well as broad environmental and social concerns. Dozal, a poet from El Paso, found a metaphor for a hybrid border identity in the vinegaroon, an arachnid that looks like a cross between a tarantula and a scorpion with pincers and whip-like tail. Gutiérrez, a poet, essayist and editor, contemplated the dramatic and deadly consequences of changing immigration policies comparing her parents own migration history to the conditions faced by contemporary migrants.

In addition to their own writing and research, Dockter, Dozal, and Gutiérrez spent four days over the course of their residency with the Borderlands Earth Care Youth Institute. This program, sponsored by the Borderlands Habitat Network, engages marginalized youth in hands-on restoration work of the local ecosystem while providing leadership and educational opportunities. With the high school students, Dozal, Dockter and Gutiérrez worked on land restoration projects: planting trees one day and making adobe bricks another. Then, they used creative writing to give the students an opportunity to reflect on their labor. The high school students presented their written reflections as part of the BECY graduation ceremony in front of their families and the Patagonia community. “I am way stronger than I thought,” student Eden Lattanzio explained standing before a photograph of herself welding a chainsaw.

Creative writing offers a place to reflect on who we are and how we exist in relation to others and to the world we share. In the remote stretches of desert near Arivaca, a series of simply painted crosses, erected by the artist Alvaro Enciso, stand as monuments to migrants who died on their journey. Writing about Enciso’s crosses, Gutiérrez provided an apt description of the power of creative writing, a description that would have made Rukeyser proud: “It is these kinds of artistic representations that operate as both homage and reminder that we need each other to get by,” Gutiérrez writes. “We need each other to remember. We need each other to witness.”

Susan Briante is the author of three books of poetry, The Market Wonders (AhsahtaPress 2016, Utopia Minus (2011), and Pioneers in the Study of Motion (2007). She is Associate Professor on Creative Writing at the University of Arizona.