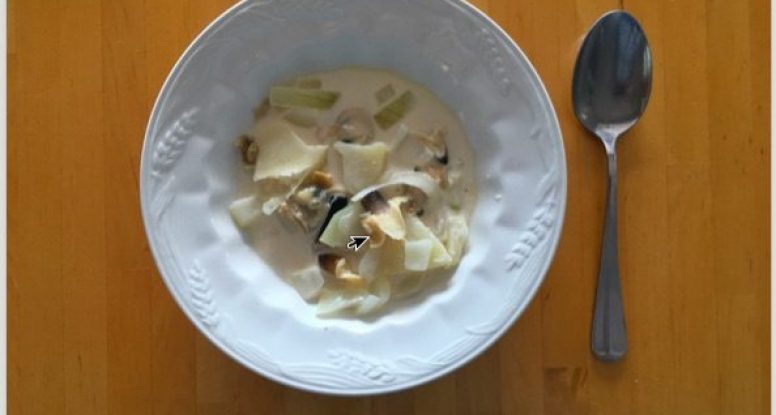 Grand Manan Field Studies 2016: from sea to steamers to soup

Among my many goals for our time on Grand Manan Island, catching, cooking, and eating seafood was at the top. Growing up in Denver, with a rising interest in eating locally and a budget that rarely included lobster and shellfish, I always loved ocean cuisine, but rarely took part. So, when Michael Brown offered to take us clamming, I was immediately in. Michael Brown is somewhat a legend on Grand Manan. I heard about him from last year’s U of A Field Studies participants, who were offered a similar lesson in clamming. When we arrived on the island, I heard rumors about this eighteen-year-old fisherman, a recent graduate of Grand Manan Community School, who spends his time balancing successful business ventures in the dulsing, lobster, and clamming industries.

When we pull up to the shore in Grand Harbour to meet with Michael, he is slinging bright blue lobster traps from one giant stack to an even taller stack. He waves hello, and explains his recent discovery that he can stack the traps – each weighing around seventy pounds, each heavier than I’d like to carry – seven high. I believe him because he proves it, all while describing to us how lobster traps have developed over the past ten years. After this brief lesson, he grabs the clam hacks and we make our way to the beach.

I am giddy and hardly trying to hide it. Michael explains the art of clamming as though anyone can do it. Step one: look for holes in the sand. Step two: dig the hack – a tool similar to a garden hand rake, only infinitely cooler than the hand rake that we brought along – into the sand, then leverage it to pull up as much as possible. Step three: look for clams and put them in the bucket.

Easier said than done. I struggle with step one, finally realizing that if I can’t see any holes in the sand, I just have to pick a spot and start digging. Which I do, and it works! Behold: the first clams I ever dug. 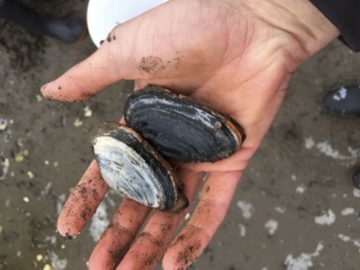 Michael has a clamming license, which is necessary for him to sell his wares. Otherwise, he explains, one can dig 100 clams a day for personal use. Together, Danielle, Joseph, Alison and I dig up maybe 50 clams, well below our collective limit of 400, but enough for a nice meal, and enough to make my hands start to hurt. 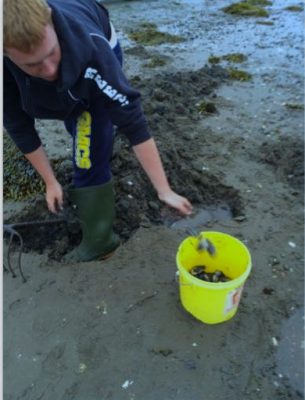 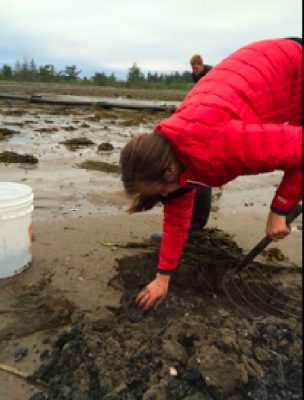 As we head back to the car, Michael talks us through the current market for sea products on the island, intel that I aim to commit to memory as I begin to imagine my post-grad school life as a full-time clammer. Michael explains that he used to make all his money clamming. Now, he spends part of his time collecting dulse, nori, and sea lettuce, depending on the price, in addition to his lucrative job lobster fishing.

I wave goodbye and head with our team, and our clams, back to Alison’s house to begin what I view as an equally crucial part of the clamming experience: cooking. My seafood culinary skills are fairly limited, as in: I can grill salmon. I have never cooked with clams, so I hover around Alison as she demonstrates the process.

Her method is fairly simple. First, we soak the clams in a bucket of fresh water. Apparently, if you do this for a while, the clams clean themselves out. We are slightly impatient, and hungry, so we skimp a bit on this step. We boil a bit of water in a huge stock pot (a true kitchen staple on this island) and dump the clams in to steam. Then we melt a whole lot of butter.

That is about it. When the clams open up about five minutes later, we strain them onto a tray, which we plant in the middle of the table. We saved some of the clam broth so that we can give them a good bath (an easy fix if you just don’t have time to soak them) before dousing them in butter.

No more than a half hour after we leave Michael Brown, I find myself sitting around the table eating the freshest seafood I have ever enjoyed. This is the definition of eating locally, knowing where your food comes from. As our bellies fill – as we shift from eating the clams, to simply talking about how much we adore the clams – Alison makes another one of my dreams come true.

“If we have clams left over,” she says, “you can take them home and make chowder.”

Since arriving on the island, I have been sneaking away to read recipes from the Grand Manan Cookbook, a collaborative publication compiled by the Grand Manan Hospital Auxiliary. Alison has two editions – one from 1979, and a newer edition published a few years back. Just earlier than day, I scored a reprint of the 1952 edition from the Grand Manan Museum. Among delicious recipes for lobster stew, lobster curry, baked fish of all varieties – and two delightful recipes for cod tongues, which I have yet to track down on the island, is a recipe for clam chowder.

I resist the urge to add the dulse flakes that were given to us the day before. I resist the urge to chop up the garlic scapes I bought at the farmer’s market. I trust Maud and I do what she tells me. I read the recipe twenty times and obsess over in which order, exactly, to add the milk and clams. And then, twenty minutes later, I pour a steaming bowl of chowder and marvel at the consistency. I wander out to the porch and savor the salty essence of ocean’s clams, how it mellows with the richness of milk and butter. 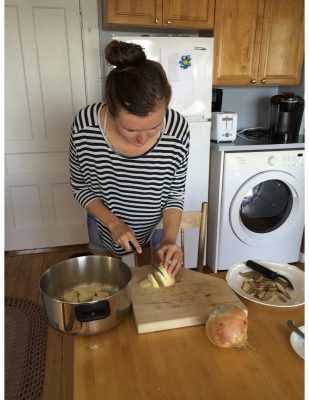 I thank Maud for her simple, yet inarguably crucial contribution to the Grand Manan Cookbook. I thank Michael Brown for his detailed lesson in clamming. I am currently busy planning my future. As Michael diversifies his products, maybe, I think, I could dig for clams, make chowder, sell chowder. I want desperately to belong in a food system such as this – where one digs the food from the earth, combines it with as little as possible, follows recipes integral to a community, and shares it with friends.

I have no illusions that I could step into the tradition of clamming and sustain a reasonable business right away. But I can learn! I can study! Perhaps Michael will take an apprentice? I realize that, first off, my plan requires a few simple life changes.

Step one: buy a clam hack. 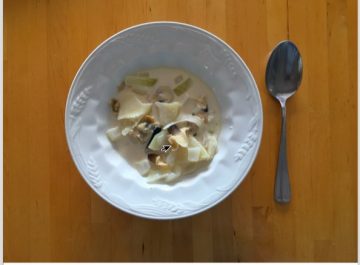