To collect, preserve, and make accessible: If you read enough archival mission statements, you’ll see these words again and again. As a former almost-archivist—one who received her degree but left the profession before earning the full-fledged title—I’ve read quite a few, and I knew before I even arrived on Grand Manan that I wanted to visit their archives. With rain and cold weather on the forecast, there was no better time.

The archives are housed within the Grand Manan Museum, in an addition that was built in 1997—the same year Ava Sturgeon assumed the title of Archivist. Though not formally trained in archives management, Ava learned all she could from Gleneta Hettrick, the former archivist, who also worked as a librarian and history school teacher on the island. The position itself is only a part-time position, funded largely through donations (by individuals and local organizations like the Rotary Club) and matching provincial grants. 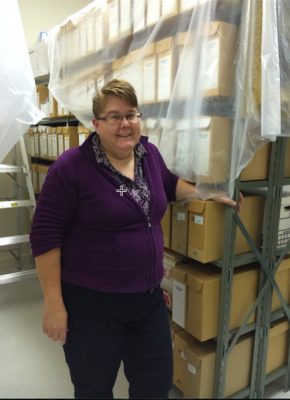 Ava Sturgeon stands in the “vault,” the archives’ storage space. Plastic sheets are draped over the shelves because the Museum’s roof is leaking, and they are trying to raise the funds to repair it.

As is true for almost all archives, funding is always a high concern. It’s never certain how much funding the archives will receive, or when, but Ava has learned to be resourceful. When they needed shelving for their new storage area—which could have run thousands of dollars—Ava asked around town. A boat-building company had just replaced the shelving in their warehouse and left the old sitting outside in the elements, but Ava hauled the shelves to the archives, sanded off the rust, and repainted them herself.

To process the archives’ collections, Ava relies heavily on volunteers—often, retired members of the community who are invested in preserving the history of the island. When we arrived on Monday morning, two women from the genealogical society were seated in front of a computer, transcribing names from New Brunswick’s census. As is also true of many archives, genealogical research is one of the most popular areas of study. But skimming through the available finding aids—located in a three-ring binder and complete with collection descriptions, scope and content notes, and container lists (even down to the folder!)—offered research opportunities ranging from the history of churches and local businesses on Grand Manan to scientific research conducted on the neighboring islands.

I wanted to read about birds.

The Grand Manan Museum houses Allen Moses’ Bird Collection: eighteen cases holding over three hundred species of bird found on the island. In addition to being a prolific taxidermist, Allen Moses was instrumental in the preservation of the Common Eider, whose nests were plundered for eggs and down, leaving the eiders close to extinction in the Bay of Fundy. The Grand Manan Archives is in possession of many of Moses’ papers and correspondence, and there are additional collections that include reports of bird sightings and populations on Grand Manan, Kent Island, Machias Seal Island, and others across the bay. 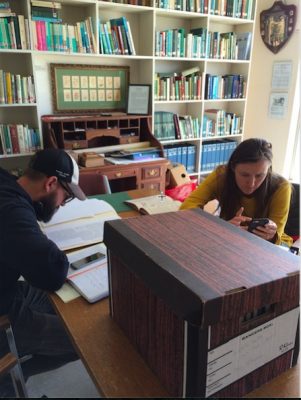 Joseph and Peyton spent the morning digging through the archives, too. Joseph rifled through a box of black and white photographs and tintypes from the 1860’s and 1890’s. Peyton looked through the collection of books that lined the shelves—and even found a book of recipes (for birds!) that we’ve yet to try.

One of our best finds, though, was a poem about a puffin, shaped like a muffin, who hadn’t anybody to play with at all. I won’t spoil the ending for you.